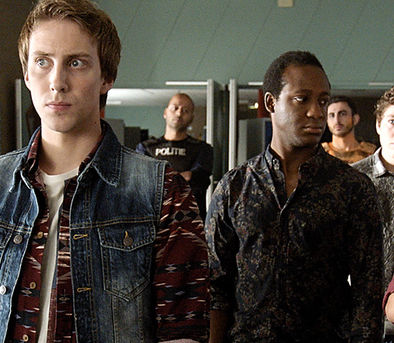 "To celebrate, this morning the cast were surprised by former cast members on the set of SpangaS the Series"

It’s party time at Spangalis College: the film SPANGAS IN ACTION, produced by NL Film, has sold more than 100,000 cinema tickets. To celebrate, this morning the cast were surprised by former cast members on the set of SpangaS the Series and presented with a Golden Film award on behalf of the Netherlands Film Festival and the Netherlands Film Fund. At the same time, the Netwerk Scenarioschrijvers (Dutch Screenplay Writers’ Network) presented the Golden Pen to the film’s director and author of the screenplay, Jop de Vries.

In SPANGAS IN ACTION, the friendship between Raaf (Lennart Timmerman) and Abel (Ricardo Blei) comes under pressure when Spangalis College is closed down and the pupils are to be sent to different schools. As part of their campaign to prevent this, the friends decide to occupy the school building. But things don’t do according to plan. This leads to a heated conflict between Raaf and Abel, and two factions emerge in the close-knit group of friends. Only after the situation gets really out of hand do they realise the true value of friendship.

SPANGAS IN ACTION is a film by director Jop de Vries, produced by NL Film in co-production with KRO-NCRV and made with support from the Netherlands Film Production Incentive and CoBO Fund. The film is distributed by Dutch FilmWorks and can currently be seen on 110 big screens.

The Golden Film, Platinum Film and Diamond Film awards are presented by the Netherlands Film Festival and the Netherlands Film Fund to Dutch films which sell 100,000, 400,000 and 1,000,000 cinema tickets during their runs. The Crystal Film award is given to Dutch documentaries that have sold 10,000 cinema tickets. The Golden Film award is accompanied by the Golden Pen, presented by the Netwerk Scenarioschrijvers to the writer of the film’s screenplay.