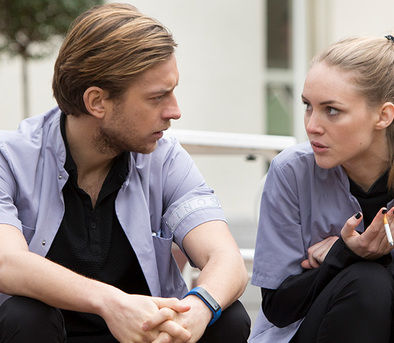 "Five medical students take part in an experiment that allows them to experience death. But at what cost? "

Death has never been as seductive as in the tense new AVROTROS drama series Project Orpheus. What is the afterlife like? Are there more things in heaven and earth? Five medical students take part in an experiment that allows them to experience death. But at what cost? The more fascinated they become by Project Orpheus, the more they are prepared to really risk their lives.

Ivan, Nienke, IJsbrand, Amira and Daan get the chance to spend a year studying under the renowned Doctor Lunshof. But what starts off as a scientific adventure ends up being a terrifying nightmare. The students accidentally come across Project Orpheus: a project in which test subjects are rendered clinically dead and then injected with a secret medicine that brings them back to life. For a short while, they experience the hereafter, suspended between life and death. And this gives them a special gift, which at first seems extremely valuable, but perhaps actually brings a host of hidden dangers…

It gradually becomes clear that the experiment doesn’t only serve a scientific purpose. Every now and then, people are disappearing from the hospital. Are they being used for the experiment? And who is the mysterious assistant, Zeger?
This unique, exciting, sci-fi thriller drama series – an adventure the like of which has not been produced in the Netherlands before – finally culminates in an apotheosis that poses the ultimate question: who is strong enough to survive his own death?