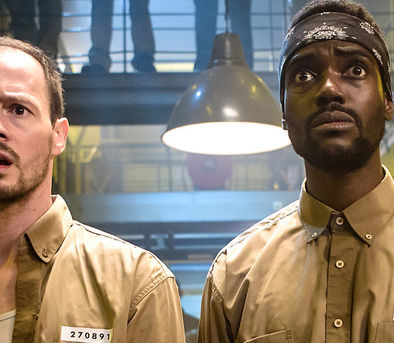 "Cops have never been so dirty."

POPOZ is a brand new police series, produced by NL Film, in which two detectives named Ivo and Randy and their intern Cornelius (Coco) fight crime in unpredictable – and often absurd – ways. In spite of the fact that Ivo and Randy are serious detectives, they curse, take drugs and are violent – not even hesitating to shoot their intern. As the mood takes them, they are lazy, vengeful, lewd and jealous. Popoz is directed by Martijn Smits and Erwin van den Eshof, who also write the script, with Wijo Koek. The role of Ivo is played by Huub Smit (New Kids, Van God Los, Pulpshow) and the role of detective Randy is played by Sergio Hasselbaink (Sonny Boy, Flikken Maastricht, Gewoon Geluk). Noel Deelen (Kill Zombie) plays the hapless intern and Uriah Arnhem (Van God Los, Hi) has a recurring role as the villain. Ancilla Tilia also has a guest role as the sexy pathologist.

The comical situations the characters get into are usually the result of misunderstandings, macho behaviour and a desire to experience the kind of action and violence Ivo and Randy have seen in American movies. However, they never actually get to live out these spectacular fantasies, because some trivial everyday distraction always comes along, such as having to take a dump just when a wild car chase is about to start. The 6-part series POPOZ starts on 3 November at 10 p.m. on Comedy Central.