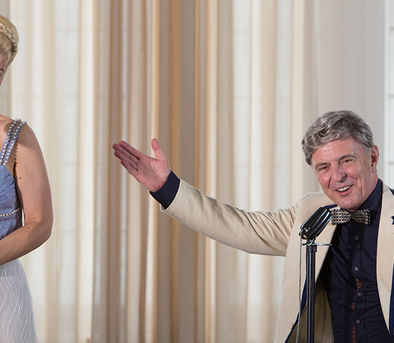 "It’s fantastic that we have once again been able to bring together a cast of such quality."

From 16 March 2015, MAX will broadcast Goedenavond, Dames en Heren on NPO 1. This 8-part musical drama series is set in the early ’60s – the era when the influence of television on everyday life was great, and growing.
The script was written by Jean van de Velde and Rita Horst directs. The producers are Job Gosschalk and Alain de Levita.

Head of MAX Jan Slagter: “It’s fantastic that we have once again been able to bring together a cast of such quality. When you consider that Goedenavond, Dames en Heren is being made by a highly experienced, familiar crew and is crammed full of marvellous songs too, you will get some idea of how proud I am. I have great expectations for this worthy successor to Mother, I Want to Join the Cabaret.”

NL Film producer Alain de Levita: "Given the success of Mother, I Want to Join the Cabaret, it wasn’t difficult to once again assemble a superb cast. The same team, with the addition of Jean van de Velde as scriptwriter, will ensure that we raise the bar even higher in the hope of equalling – or even surpassing – our previous success."

About the series
Anton and Els van Dijk run a hairdressing salon in Hilversum. Their daughters Ietje (20) and Eef (18) are asked by Anton’s brother – TV station head Peter van Dijk – to audition as television presenters. For one daughter, this opens a window onto an exciting new world, while for the other it heralds a time of personal tragedy and radical change.

The TV station is marking 12½ years in the business, and Peter wants a big celebration. This also represents a chance to make good for past mistakes. In attempting to do so, he not only turns his own life upside down, but also those of once famous but now fractious singing duo Benno en Will, who Peter used to manage years ago. Will Peter succeed in getting the duo back in front of the cameras? What consequences will Ietje and Eef’s unorthodox choices have for their family?

Goedenavond, Dames en Heren is produced by NL Film and Kemna & Zonen, in cooperation with Omroep MAX.
Based on an idea by Job Gosschalk