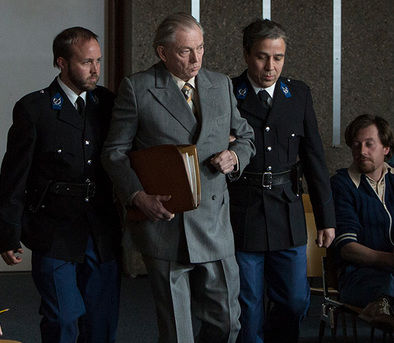 "I remember the impact the case had back then quite well. Therefore, it is important that this part of our history is never forgotten."

Hilversum, May 3rd – In the fall of 2016, Omroep Max will premiere ‘The Menten Case’. The mini-series is based on the true story of journalist Hans Knoop, who attempts to find the truth behind the then not yet prosecuted war criminal Pieter Menten. In the seventies, the case caused uproar in the media and in the political landscape in The Netherlands.

In ‘The Menten Case’ we follow journalist Hans Knoop, editor in chief of Accent, a magazine affiliated with newspaper De Telegraaf. Knoop slowly gets personally involved in the hunt for the not yet prosecuted war criminal Pieter Menten. Menten lives a lavish life in a villa about thirty miles south of Amsterdam, when he decides to auction off part of his art collection. Newspaper De Telegraaf decides to interview Menten about his art collection, which is read by Chaviv Kanaan, a journalist from Israel, who obtained the interview through Dutch correspondent dr. Henriette Boas. Kanaan accuses Menten of the execution of Jews, including several family members of his, in the Polish villages Podhorodce and Uricz. Kanaan gets in contact with Hans Knoop and tells him that Menten, in 1943, shipped three train carriages, filled with stolen art, to The Netherlands; 'The Menten Case' is born. Knoop persists in the story, but Menten refuses to go down quietly.

Jan Slagter: “I remember the impact the case had back then quite well. Therefore, it is important that this part of our history is never forgotten.”

Directed by Tim Oliehoek, the screenplay of ‘The Menten Case’ is written by Robert Jan Overeem and Jan Harm Dekker, based on the book Hans Knoop wrote about the case forty years ago.