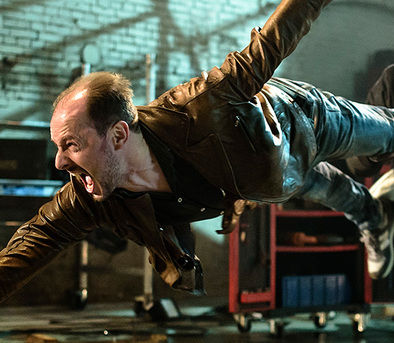 Action comedy POPOZ, based on the series of the same title from Comedy Central, has sold more than 100,000 cinema tickets. This afternoon, directors Martijn Smits and Erwin van den Eshof, lead actors Huub Smit and Sergio Hasselbaink and producers Alain de Levita and Kaja Wolffers were surprised with a Golden Film award. In addition, the Dutch Screenwriters’ Network awarded a Golden Pen to Wijo Koek, who wrote the screenplay for POPOZ with Smits and Van Den Eshof.

Detectives Ivo (Huub Smit) and Randy (Sergio Hasselbaink) just want to fight crime like they do in the action movies. When – together with their enthusiastic intern Coco (Noel Deelen) – they try to tackle a hostage situation THEIR way, it all ends in a hellfire of bullets, explosions and stacks of bodies. They wind up in jail, where they are forced to take on dangerous master criminal Mercator (Pierre Bokma). When he puts Ivo and Randy on the trail of a drugs cartel that has the city in a deadly grip, the gloves come off to bring this operation to a satisfactory conclusion. This is the kind of action they want!

POPOZ is a film by directors Martijn Smits and Erwin van den Eshof, who also made the comedy series of the same title for Comedy Central. Smits and Van Den Eshof also wrote the screenplays for both productions, in collaboration with Wijo Koek. The film was produced by NL Film producers Alain de Levita, Kaja Wolffers and Joris van Wijk and made with contributions from the Suppletion Scheme and the Netherlands Film Production Incentive from the Netherlands Film Fund. POPOZ is distributed by Dutch FilmWorks and is currently showing on 13 screens.
The Golden Film, Platinum Film and Diamond Film are awarded by the Netherlands Film Festival and the Netherlands Film Fund to Dutch films that sell 100,000, 400,000 and 1,000,000 cinema tickets respectively during their theatrical run. The Crystal Film is awarded to Dutch documentaries that sell 10,000 cinema tickets. The Golden Pen is also presented by the Dutch Screenwriters’ Network to the screenwriters of films earning the Golden Film award.