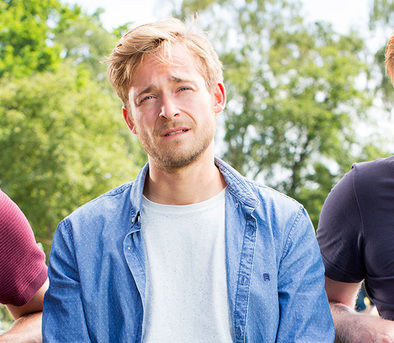 "We laughed so hard when we initially read the script; the after-effects of a bizarre incident cause for hilarious situations."

Matthijs van de Sande Bakhuyzen and Loes Haverkort star in FATHER FIGURE (Dutch litterally translation: MADE FOR EACH OTHER), a romantic comedy about falling in love when you least expect it. Matthijs plays Felix; a single thirty-something, who, after a bizarre incident, is unable to have children. Loes plays tv-host Jip, who would love to become a mother, but is unable to become pregnant with her boyfriend. FATHER FIGURE is currently filmed by director Martijn Heijne (Screamweek). Also starring in the movie are Fabian Jansen, Roeland Fernhout, Eva van de Wijdeven, Sanne Vogel and Ferdi Stofmeel.

Producer Kaja Wolffers (NL Film): “We laughed so hard when we initially read the script; the after-effects of a bizarre incident cause for hilarious situations. Funnier and fresher than the romantic comedies we’ve come accustomed to, I dare say. The good atmosphere and chemistry on set at least show that the cast and director are ‘made for each other’."

NL Film, known for cinema-successes like 'Men in the City 2' and 'Kneeling on a Bed of Violets', produces this new title in collaboration with RTL Entertainment. Dutch FilmWorks expects to release FATHER FIGURE in the spring of 2017.

The romantic comedy is based on the successful German film Vaterfeunden (2014).

Felix enjoys single life to the max; he is happy with a life without a steady relationship and kids. Until a one night stand causes a bizarre incident. When Felix, after the incident, wakes up in hospital, he is diagnosed ‘unfertile’ for the remainder of his life. When starting a family suddenly isn’t an option anymore, the thirty-something suddenly dreads the fact that he will never become a father. His brother Jelle discovers that one donation of his brother to the spermbank has found it’s way to an egg cell. The egg cell of tv-host Jip. From that moment on Felix is determined to become a father of the only child he will ever have, whether Jip has a boyfriend, or not…