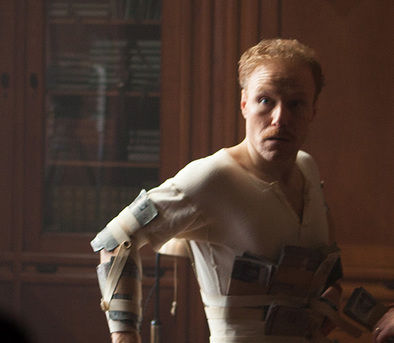 Barry Atsma and Jacob Derwig are 'The Resistance Banker'

"When banker Walraven van Hall (Barry Atsma) is asked to make his financial contacts available to help the Dutch resistance, his decision is quickly made."

The story of resistance hero and banker Walraven (Wally) van Hall, who became known during World War II as ‘the resistance banker’, is being filmed with Barry Atsma and Jacob Derwig in the lead roles. Derwig plays Gijs van Hall, brother and business partner of Wally (Atsma) in the latest film by director Joram Lürsen (A NOBLE INTENTION). The screenplay was written by Marieke van der Pol (TWIN SISTERS, BRIDE FLIGHT) and production is by Alain de Levita, Sytze van der Laan and Sabine Brian of NL Film (IN MY FATHER’S GARDEN, TONIO).

Shooting started at the end of February, and the film is expected to hit cinemas in the spring of 2018. During WWII, Wally van Hall (1906-1945) set up an underground bank to finance resistance activities. To do this, together with his brother Gijs he dreamt up the biggest bank fraud in Dutch history. “Although Walraven van Hall is undoubtedly one of the biggest heroes in the history of the Netherlands, he has remained unknown to most people. Through his role as the financier of the Dutch resistance, he caused huge damage to the German occupier'', according to initiator and producer Sytze van der Laan. ''The aim of this film is to remind us of this.'' His children are cooperating on the making of the film: ”The family is very happy about the fact that, alongside the monument, there will be a painstaking, palpable memento for generations to come of the huge work done by my father'', Wally’s son Aad van Hall said in 2011 following the unveiling of the monument to his father on Frederiksplein in Amsterdam, when the plans for the film were being finalised.

About THE RESISTANCE BANKER
When banker Walraven van Hall (Barry Atsma) is asked to make his financial contacts available to help the Dutch resistance, his decision is quickly made. Together with his brother, he comes up with a risky way of taking out huge loans to finance the resistance. When even this proves insufficient, the brothers think up the biggest bank fraud in Dutch history: tens of millions of guilders are removed from the Dutch Central Bank from under the noses of the Nazis. But the bigger the operation becomes, the more people are involved. Every day the risk gets bigger of someone making that crucial mistake that could put an end to the operations – and the lives – of the resistance bankers.

THE RESISTANCE BANKER is produced by NL Film in cooperation with Nanook Entertainment, Zilvermeer Productions and the Evangelische Omroep (EO). The film was made with support from The Netherlands Film Fund thanks to a Telescoopbijdrage [‘telescope funding’] and the Cobofonds. Distribution is by Dutch FilmWorks.