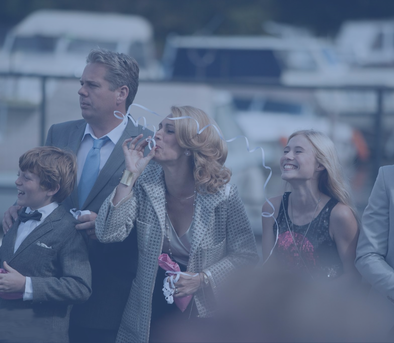 "For me, it will be really new and exciting to hear our song at the end of such a big film in the cinema!"

Bløf and Nielson to provide title song for MEN IN THE CITY. 28 November sees the cinema release of A MAN’S HEART: the all-star romantic comedy about men in search of true love. The title song has also been made by men; the four gentlemen of Bløfand Nielson have gone into the studio together to create the title number (also called A Man’s Heart). A first fragment of the result can be heard in the trailer for the film, which had its première 11 September in the Pathé Tuschinski cinema, with the cast in attendance. The full song and accompanying video will be released later this month.

Bløf's Peter Slager: “This wasn’t the first time we have been asked to write the title song for a feature film, but this time was very different. The collaboration with Nielson was very refreshing and inspirational for us, and has resulted in a title song that we would probably not have come up with independently of one another. A great experience!”

Nielson adds enthusiastically: “For me, it will be really new and exciting to hear our song at the end of such a big film in the cinema!”

Producer of MEN IN THE CITY, Alain de Levita of NL Film (ELLIS IN GLAMOURLAND, THE STORM, ALL THE TIME IN THE WORLD, TAPED) is proud: “For me, Bløf and Nielson are a dream artistic combination for the title song. This beautiful number really completes the film. Star cast, great directing, a good script and now an absolutely brilliant title song.”

The biggest romantic comedy of this winter is populated by the likes of Daan Schuurmans, Barry Atsma, Jeroen Spitzenberger, Georgina Verbaan, Teun Kuilboer, Katja Herbers, Fabian Jansen, Hadewych Minis, Jon van Eerd, Liliana de Vries and Sanne Vogel. MEN IN THE CITY is directed by Mark de Cloe. About A MAN’S HEART: Who dares follow his heart in the search for true love and happiness – and who doesn’t? We get to know each of the men through the time they spend together in the gym. Advertising executive Tim (Daan Schuurmans), who is starting to panic as his marraige to the perfect Laura (Hadewych Minis) approaches. His best friend Wouter (Jeroen Spitzenberger), who is doing everying he possibly can to cling on to his girlfriend Nicole (Katja Herbers). The shy Niels (Fabian Jansen), who is hoping that the recently divorced Susanne (Georgina Verbaan) could be the woman of his dreams. But he doesn’t know that her ex, frustrated Frank (Teun Kuilboer), doesn’t know when to give it up. And then there’s womanizer Dennis (Barry Atsma), who instead of a string of babes suddenly finds successful folk singer Roy (Jon van Eerd) at his side …

MEN IN THE CITY is based on the German cinema hit MÄNNERHERZEN. The original screenplay was adapted by Maarten Lebens (Happy Family, The Strongest Man in Holland, Mother, I Want to Join the Cabaret).