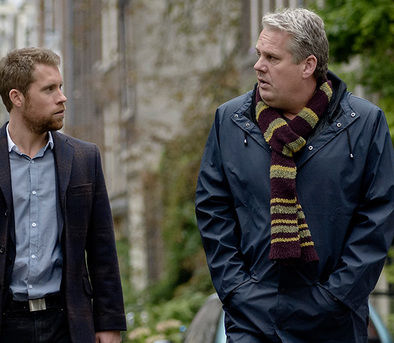 "It was marvellous to work with this fantastic group of actors against such a wonderful backdrop as the city of Amsterdam, and the Jordaan area in particular."

With the aim of strengthening the range of good Dutch drama, the spine-tingling new mini-series Bureau Raampoort is to be launched soon on SBS6. The lead roles will be played by none other than Thomas Acda and Tim Haars. Detectives Peter van Opperdoes (Acda) and Jacob Holm (Haars), working out of the Raampoort police station in the Jordaan area of Amsterdam, solve chilling murders in two nail-biting episodes. Bureau Raampoort is written by Simon de Waal (writer of Baantjer and Spangen, among others) and can be seen on 3 and 10 December at 8.30 pm on SBS6.

Bureau Raampoort takes place in and around the police station of the same name in Amsterdam, where Peter van Opperdoes picks up his work as a detective having spent a year away. He quickly becomes involved in the unravelling of a mysterious, sinister murder. Jacob Holm deputized for Van Opperdoes while he was away. Van Opperdoes and Holm have completely different characters and this leads to serious clashes between the two detectives. Nevertheless, when a savagely mutilated corpse is found in the Jordaan district, they have to find a way to work together.

Alongside Thomas Acda and Tim Haars, Ricky Koole, Tamara Brinkman, Henk Poort, Tim Murck and Eric van Sauers show us their most criminal side in this new SBS6 mini-series. The city of Amsterdam also plays a big role in Bureau Raampoort. Thomas Acda: “It was marvellous to work with this fantastic group of actors against such a wonderful backdrop as the city of Amsterdam, and the Jordaan area in particular. Amsterdam is superbly suited to the kind of exciting murder case we solve in Bureau Raampoort.”

Alain de Levita of NL Film, the leading production house that has been responsible for series such as Penoza and Mother, I Want to Join the Cabaret and films such as Men in the City and The Storm, produced Bureau Raampoort in cooperation with Kemna & Zonen. The script for the mini-serieswas written by author and screenwriter Simon de Waal. For many years, De Waal has collaborated on scripts for the popular police series Baantjer. He has also written books with Appie Baantjer under the pen name ‘Baantjer and De Waal’. Bureau Raampoort is directed by Michiel van Jaarsveld.

Bureau Raampoort marks another investment by SBS6 in Dutch drama. Following on from previous successful series such as Danni Lowinski, Dokter Tinus and Cellblock H, SBS6 hopes to twice entangle the audience in detective Van Opperdoes’ tense search for a killer in Bureau Raampoort.