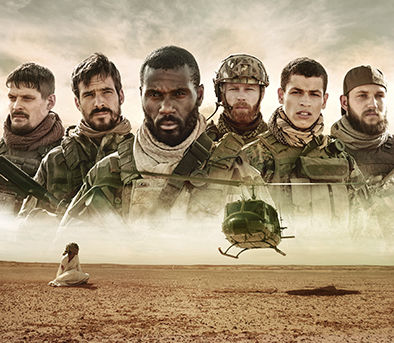 "It is incredibly exciting and inspiring to see how our diverse portfolio is able to capture more and more attention beyond its national borders."

Thriller series Commandos, Telefilm The Columnist, and youth series Floor Rules and Remy and Juliyat. These four NL Film titles all with different genres and target audiences have one thing in common: they are traveling around the world.

Creative Director/Producer NL Film Kaja Wolffers: “It is incredibly exciting and inspiring to see how our diverse portfolio is able to capture more and more attention beyond its national borders. We are delighted and proud that the work of these creators is now visible outside the Netherlands, and we notice that this growing exposure puts future NL Film projects in the spotlight.”

Commandos
The ten-part thriller series Commandos, produced by NL Film and commissioned by AVROTROS, has been purchased by streaming services SBS in Australia and TOPIC in the United States. Last-mentioned will also release the series in Canada.

For the past months, Commandos was broadcast every Sunday evening and has been available for streaming on NPO Start Plus. On this on-demand service, Commandos has hit an impressive number of one million streams.

The Columnist
On January 8, 2020, The Columnist premiered on Dutch tv channel NPO 3. Since then, this telefilm, supported by CoBO and BNNVARA, won the hearts of many horror fans all over the world. The film has screened at festivals in Germany, Canada, UK, Romania, Norway and the US.* At Fantasia Festival in Montreal, The Columnist won an Audience Award.

This success does not remain unnoticed. The black comedy has recently been purchased by Film Movement (the US and Canada), Prio Spain (Spain), Vertigo Film (UK, Australia, and New Zealand), and Evrit (South Korea).

Floor Rules
From the very beginning, Floor Rules has been an enormous success, not only in the Netherlands but also beyond its borders. Previously it has been announced that KiKa, a German youth channel, French media group Canal+, Belgian public broadcaster VRT, the Danish Danmarks Radio and NRK Norway have purchased this popular youth series. NL Film can now proudly add Spanish broadcaster TV Catalunya to that list.**

Remy and Juliyat
During the holidays last year, viewers of NPO Zapp followed the extraordinary love story of Remy and Juliyat. Shortly, this youth show, produced by NL Film and commissioned by AVROTROS, will screen abroad, after its purchase by Finnish YLE and RTV Slovenia. In Slovenia, Remy and Juliyat will broadcast as a film.